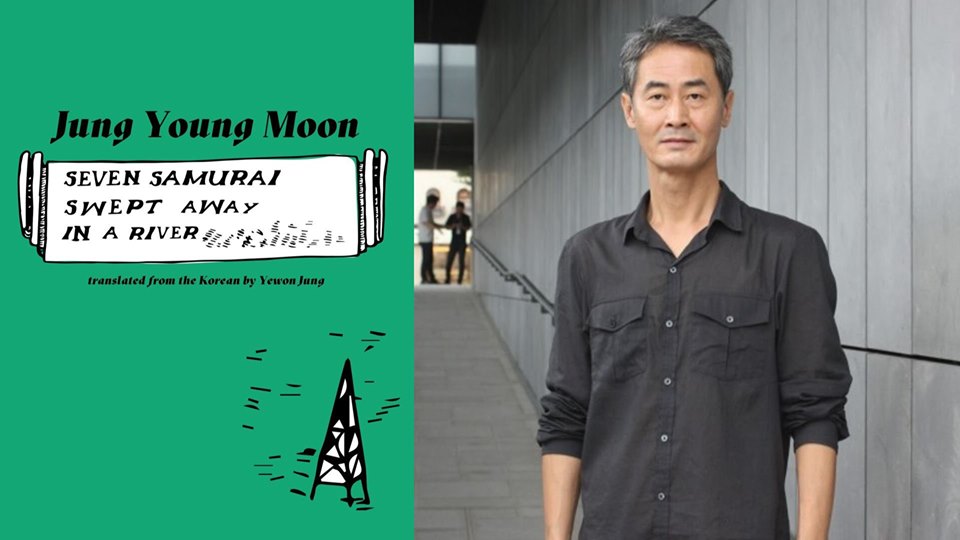 Join us for a reading and signing by critically acclaimed Korean novelist Young Moon Jung as he presents his newest work SEVEN SAMURAI SWEPT AWAY IN A RIVER, published by Deep Vellum.

In his inimitable, recursive, meditative style that reads like a comedic zen koan but contains universes, Seven Samurai Swept Away in a River recounts Korean cult writer’s Jung Young Moon’s time spent at an artist’s and writers residency in small-town Texas. In an attempt to understand what a “true Texan should know,” the author reflects on his outsider experiences in this most unique of places, learning to two-step, musing on cowboy hats and cowboy churches, blending his observations with a meditative rumination on the history of Texas and the events that shaped the state, from the first settlers to Jacky Ruby and Lee Harvey Oswald. All the while, the author is asking what a novel is and must be, while accompanied by a fictional cast of seven samurai who the author invents and carries with him, silent companions in a pantomime of existential theater. Jung blends fact with imagination, humor with reflection, and meaning with meaninglessness, as his meanderings become an absorbing, engaging, quintessential novel of ideas.

JUNG YOUNG MOON was born in Hamyang, South Gyeongsang Province, South Korea in 1965. He graduated from Seoul National University with a degree in psychology. He made his literary début in 1996 with the novel A Man Who Barely Exists. Jung is also an accomplished translator who has translated more than forty books from English into Korean, including works by John Fowles, Raymond Carver, and Germaine Greer. In 1999 he won the 12th Dongseo Literary Award with his collection of short stories, A Chain of Dark Tales. In 2005 Jung was invited to participate in the University of Iowa’s International Writing Program, and in 2010 the University of California at Berkeley’s Center for Korean Study invited him to participate in a three-month-long residency program. in 2012, he won the Han Moo-suk Literary Award, the Dong-in Literary Award, and the Daesan Literary Award for his novel A Contrived World. His short story collection A Most Ambiguous Sunday and Other Stories was published by Dalkey Archive in 2014.