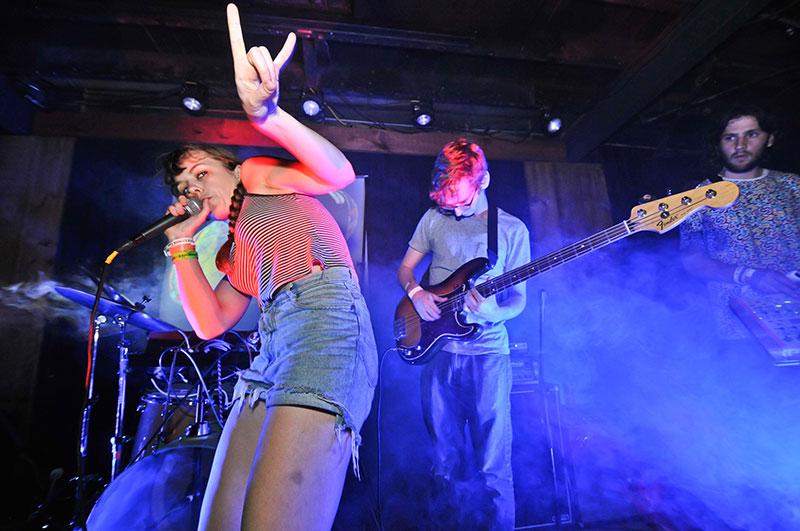 "Guerilla Toss seems to exist in an acid-drenched cartoon world future music. Stylistically, there's some sort of punk/ funk/ jazz/ jam going on, but never mind the ingredients this band's all about the end result, which is a strange, morphing blend of totally mind-bending goodness." -- BTRtv

Hailed by Rolling Stone as "one of the 10 greatest modern punk bands," Guerilla Toss are a marvel to behold onstage. One of the most exuberant live acts you'll ever see, Guerilla Toss come to Denton in anticipation of their new EP, What Would the Odd Do, out November 15th on NNA Tapes.
Guerilla Toss’ origins are somewhat unusual. They started as an experimental art-rock project at the prestigious New England Conservatory in Boston. When drummer Peter Negroponte met frontwoman Kassie Carlson at a DIY show in Allston singing in a metal/hardcore band, he quickly asked her to join Guerilla Toss and they played their first show together a week later at the infamous Death By Audio in Brooklyn, NY. The next two years were spent touring relentlessly throughout the underground DIY circuits in the US, Canada and Europe, playing house shows, warehouses, art spaces, and (literally) a pigsty in southern Spain.

During this time they released a slew of tapes, records and EP’s, label hopping around underground staples like Feeding Tube Records, John Zorn’s Tzadik, and the Vermont based NNA Tapes. In 2015, Guerilla Toss signed to James Murphy’s (LCD Soundsystem) DFA Records and relocated to Brooklyn to focus anew on making records. The DFA years proved to be an inspiring time for the band and marked a significant shift in the ensemble’s sound and attitude. A-tonal hardcore elements were replaced by a more psychedelic and harmonic approach. Moshing crowds became dancing ones as the live show evolved. GT released Eraser Stargazer (2016) and GT Ultra (2017) on DFA, both of which were met with significant critical acclaim, while barely scraping the surface of anything remotely mainstream…further establishing GT as a cult act.

But it was during this period that things took a turn for the worst: Carlson’s years of substance abuse culminated in a near-death experience, heart surgery, and a month and a half stay in Brooklyn hospital.

Though still as buoyant and inventive as ever in their ability to meld genres, the band understandably takes a turn into personal subject matter with the new EP.

"These songs mean a lot to me," says Carlson. "I’ve always written abstract lyrics that have eluded to my personal struggles, but this time I try to provide context to my metaphors and allegories. In this way, I hope to help other people who are struggling, and anything else that is a result of a corroded society that has left so many people in the dust -- especially women. Drugs are such a dude-associated thing, which has made it even harder for me to talk about. I felt gross, other'ed, and alone. I didn’t think anyone would be able to understand or relate. Experiencing severe trauma as a child creates different parameters for normalcy, and inclusion. Statistically, women are more likely to hide addiction and keep feelings inside, making it potentially much more festering and toxic. Drugs affect people of all backgrounds, regardless of race, class or gender. Addiction hits us all, and it hits hard."
That said, this is Guerilla Toss we're talking about, the so the music bursts with energy. The EP opens with the title track, "What Would The Odd Do," a callout to all the lost souls that they’re not alone in feelings of existential dread. Peter’s intense drumming, alongside Arian Shafiee’s army of guitars, marches the listener into psychedelic oblivion. Kassie’s chorus of violins echoes the sounds of art-rock string luminaries Laurie Anderson and John Cale in the crusade to be your own God, control your own destiny.

Leadoff single "Plants" is a disco-post-punk-prog epic about the perceived psychosis of the fictional protagonist, Lara. Based off the books, What A Plant Knows and The Hidden Life Of Trees, the song combats the anti-spiritual western notion that plants are devoid of all communication, when, in fact, there is an entire language of which we are “blissfully unaware.” The track also explores the old-fashioned idea of a woman being crazy, when, in reality, she simply isn’t being heard. Stephen Cooper’s driving bass line propels a force that is somewhere between Hawkwind and Giorgio Moroder. While Sam Lisabeth’s exploratory synth explosions create one of GT’s most blissful and sentimental tracks to date. With additional drum production and sound design by Catskill, NY synth wizard, MaZmiTh, the track achieves nothing less than psychedelic oblivion.

What The Yellow Umbrellas Represent At Dallas Protest